I’d feel bad if I didn’t at least tell you that I was anxiously searching for hotel rooms after the first night….

Camping with a toddler is no easy feat. Honestly, I think it would have been easier when Layton was younger. We have been trying to do a family camping trip since, well, since Layton was born. One thing led to another and the timing didn’t work out. Last year, by the time we got the chance to get away, it was getting too cold at night for me to feel comfortable bringing a few-month-old baby outside to sleep. As Winter turned to Spring, and Spring turned to Summer, then covid hit… we just couldn’t, and didn’t feel comfortable, getting up to the mountains with a tent and sleeping bags.

As the restrictions shifted, and work starting getting back to semi-normal, our schedules filled up fast. Between all our jobs, we were left deflated, stressed out, and in desperate need of a getaway. We decided it was finally time to plan a camping trip because that was an affordable vacation option for us.

October brings unpredictable weather and cold nights in Colorado, so we opted to drive to Moab to try out the family camping situation. Squeezing in a few days between major job obligations, we loaded up the truck, drove six hours across the state, then into Utah and set up camp!

We opted for a reservable, organized campground for a few reasons. 1. We both had a little bit of work to do and needed access to either wifi or good cell service and 2. I wanted a little more structure (i.e. running water and quick access to civilization). Don’t judge us; we actually LOVE camping in the most remote of places, but for our first camping trip with Layton, I felt more comfortable with less wilderness to navigate.

Upon arriving, we set up the tent as fast as we could while chasing Layton around the dirt campground as he explored the area. I set up some baby gates but it only slowed him down before he ultimately went to meet the neighbor’s dog. These gates actually did end up being perfect once we got a system down. I’ll link them down below. Our 10x10ft tent (borrowed from family) was perfect for a pack n’ play, our two sleeping bags, and plenty of extra room!

That first night was rough. It took a while to get Layton to sleep that night and he woke up several times screaming. In the end, we didn’t get him to go back to sleep in the crip. We let him sleep between us which really means him lying half across my head and kicking Daddy. Needless to say, we did not get much sleep that night and woke up looking much worse for the wear. The best we can figure is he was just a little too cold that night and the fact that we were in a very different place than home.

The next few nights were much better. We adjusted his clothes layers and blankets in and around the pack n’ play and he stayed asleep all the second night! The third night brought one midnight wake up but after lying him next to me (on the other side this time) he slept the remainder of the night. On the fourth (and final) evening, he had trouble falling asleep due to the campground being a lot busier and thus noisier. Once he was asleep, it was such a shame to have to wake him up for our early wake-up call to head back home.

At first, when we would wake up crying, I was frantic to try and get him back to sleep, in fear all the neighboring campers would hate us in the morning. By the end of the trip, I was a little more relaxed with each cry. Of course, we didn’t let him just cry it out (camping is not a great time to proceed with sleep training) but I began to not be as concerned when his tears didn’t subside right away. We got a few angry looks in the morning but far more sympathetic and friendly, “good for you’s!” from fellow campers. I figured that’s the risk (for them) of staying in a campground like that. Likewise, it was harder for us to get him to bed for the same reason.

While at camp, we tried to wrangle Layton as much as we could so we could cook and relax, but all the fences and gates are not enough to stop this kid. If he wasn’t trying to break out of our enclosure, he was pouring dirt on his head, eating rocks, or banging sticks on the metal walls of our campsite!

To round out our vacation, we filled out days with short, easy hikes at Canyonlands National Park and Dead Horse Point State Park, swimming in the campground’s pool, and spent some time walking around in downtown Moab, something we’ve never actually done on our handful of trips out there. We did pack our climbing gear, but upon seeing how active and non-stop Layton was at our campsite, we decided it probably wasn’t safe enough for us to even consider top-rope climbing, even with Layton in a baby gate enclosure.

Although camping now doesn’t look anything like pre-baby camping for Ben and I, we are learning to adjust our ideas of travel, adventure, and ourselves as a family. And that is fun.

Gear that helped us:

Comment below! Let me know if you’d gone camping with a toddler and what your recommend toddler-camping gear is! 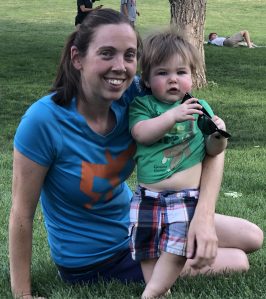 Welcome! I am Mama and I am crafting my way into motherhood. Here you’ll find stories about pregnancy and motherhood along with crafts and DIY toys for the kiddos, learning activities, and things for the house!